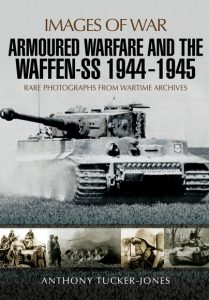 Another excellent book in the Images of War series. These books are about photographs first and foremost, showing often lesser known photos of WW2.
This particular book is about the Waffen SS armor divisions, from 1944 till the end of the war. Lots of great photos, especially suited for diorama builders, but also for WW2 researchers.

The text for each chapter is not too long, but sufficiently detailing the units, their organization and actions, and putting the photos in perspective.

The book is divides in 8 parts, each one covering a specific theatre of operations where the Aromored Waffen SS played an important part.

It is a pity that there aren’t more color photos from that era, but that’s not the fault of the author of course ! Wonderful addition to my collection of photo books !

Just click on the picture to jump straight to Pen & Sword !