Winged Pegasus and the Rangers 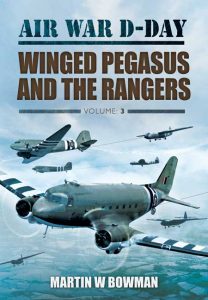 This book covers the attacks by paratroops and airborne forces during the initial phase of Operation Overlord, or the D-Day Landings. ‘Air War’ may be a tad misleading, because most of the eye-witness reports included in the book are about the preparation and subsequent fighting on the ground. But yes, ‘they came by air’.

This is a wonderful account of some of the major battles on that first night and days in June 1944. Very gripping at times, since many of the reports are eye-witness accounts of those who were actually there in the thick of it.

There are ‘only’ 4 chapters in the book, covering the actions of the British para’s and airborne troops aimed at holding off the Germans on the left flank of the landings, the attack on Pegasus Bridge, the attack on the Merville coastal battery and the attack by US rangers on Pointe du Hoc! The latter two chapters are shorter, the first two very detailed.

Plenty of charts and photos accompany the text and I especioally like the excerpts from the meoires of Piper Major Bill Millin (Chapter 2).

My only point of critique would be that I was not always sure to which bit of text the bold-printed lines belonged to (explaining from WHOM the particular text is). Sometimes it seems to belong to the preceding text, other times to the text following the bold lines. But maybe it is just me.

Apart from that little niggle this most certainly is a great book to have added to my Normandy collection !

Other books in the same Air War D-Day series by Martin Bowman are:
– Gold Juno Sword
– Bloody Beaches
– Assaults from the sky
– The Build Up