Almost afraid to get back

Get back to where? Get back into the hobby of scale modeling. I always ‘planned’ to pick up my beloved plastic kit building again once I had a bit more time. I promised that to myself …. oh….. some 45 years ago ! Or more even.  Yup, time flies when you get married, build a career, have kids, travel the world, start your own business……. and before you know it you are suddenly a pensioner without having gotten back to all of those things you loved doing half a century ago. 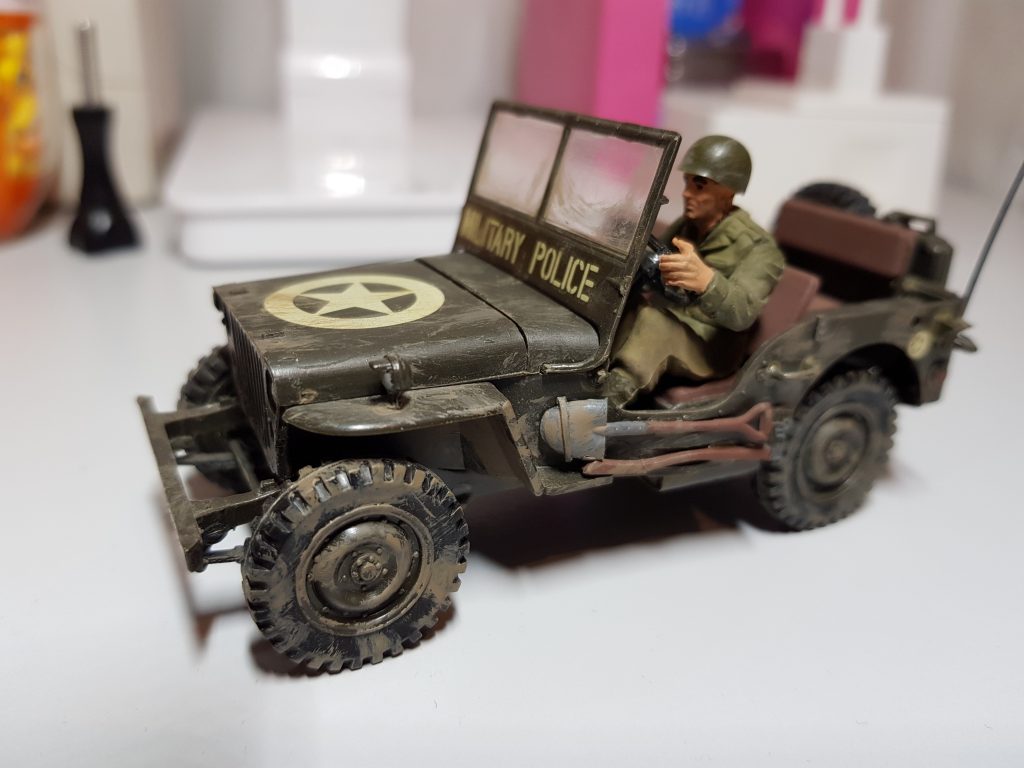 Back then I didn’t have an airbrush, not even enough money for paint, so I only painted the mud on it, leaving the original plastic bare.

About 10 years ago I bought a plastic model kit of the Lysander, back at the Shuttleworth museum in the UK, where one of the few remaining flying ones is based. I also bought a book written by one of its pilots, and I planned on building the kit and place it in a diorama, depicting one of the many adventurous landings these chaps made behind the enemy lines in France. The Lysander was also one of my 3D (Flight Simulator) projects at the time and I more or less knew everything about them by then. And thought to build the diorama the year after my visit.

Well, the kit still sits in its box, now emigrated with me to Italy and into retirement. I DID have time to prepare a little bit, before leaving my old home country, and bought new paint, glue, brushes, an airbrush, tools, foam board and lots of other things to move with me to Italy. And I searched the Internet for information on new materials and kits.

Woops…. of the 6 models I saved I managed to drop this one on the floor yesterday. It was safe for 50 years !!!!

Well, maybe the latter was a mistake. Don’t get me wrong, I met lots of new people and am in awe of what some of them build nowadays. But at the same time I am pretty much intimidated by the changes in the hobby since I last glued together a model 50 years ago ! There is now SO much to choose from, and it is SO expensive. Heck, I had NO CLUE what glue to buy, so that alone took me months to research :- ) . Alright, we sold our house, so I can buy a few kits if Nina lets me, but still.

But more importantly, I am impressed by seeing what people build, how they paint, how they make scenes look SO realistic….. when I compare that to my painting from 50 years ago, or to the model railroad we had back then (a pretty big one with tons of scenery made by yours truly!), I am wondering if I should even ATTEMPT to get back to it. I will never be able to reach a high quality and realism level…. I don’t have the time to learn and practice anymore, my eyes are getting worse….. pretty soon I guess my hands will start to tremble… *grin*.

Seriously, the things I see make me shy. Now, at 65 I am old enough to have learned that life isn’t all about competition, and that things you do for fun, you do for YOURSELF and not to impress others. But even so…… boy have things changed !! 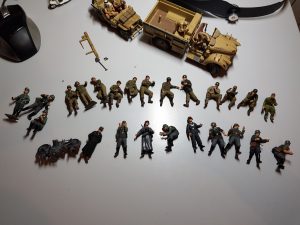 Quite a few 1/35 figures, half painted

So instead of building that Lysander dio I have in mind, I figure I will start practicing first with some of my old 1/35 models that sat in a box for 50 years, behind a closed off bit in our bedroom, and in the attic before that.
A few days ago I opened the boxes to see what was still there… and usable. I also did so before the move last year and threw away all the broken and ‘un-glued’ kits I found….. most of my 1:72 kits went. I loved them (AND played with them) to bits 50 years ago, but looking at them now they just would not do. I saved a few Shermans and some other stuff, but not many.

And then the few 1/35 kits that DID survive….. well, looking more closely over the past few days I started hesitating on them too. Apparently I had some plans back in 1965-68, because I found a few unfinished kits (one of the famous Stalin Organ), a bunch of nearly-finished US infantry, and some other. But I can’t remember where I took off or what I was doing at the time.

So here I am, just browsing Facebook pages, model websites, scale model on-line shops, collecting tools and materials, watching tutorials, trying to learn about the ‘new’ acrylic paints, about airbrushing (I had one but never used it), and much more. And now, writing about it. Still spinning my wheels, not sure where to begin. 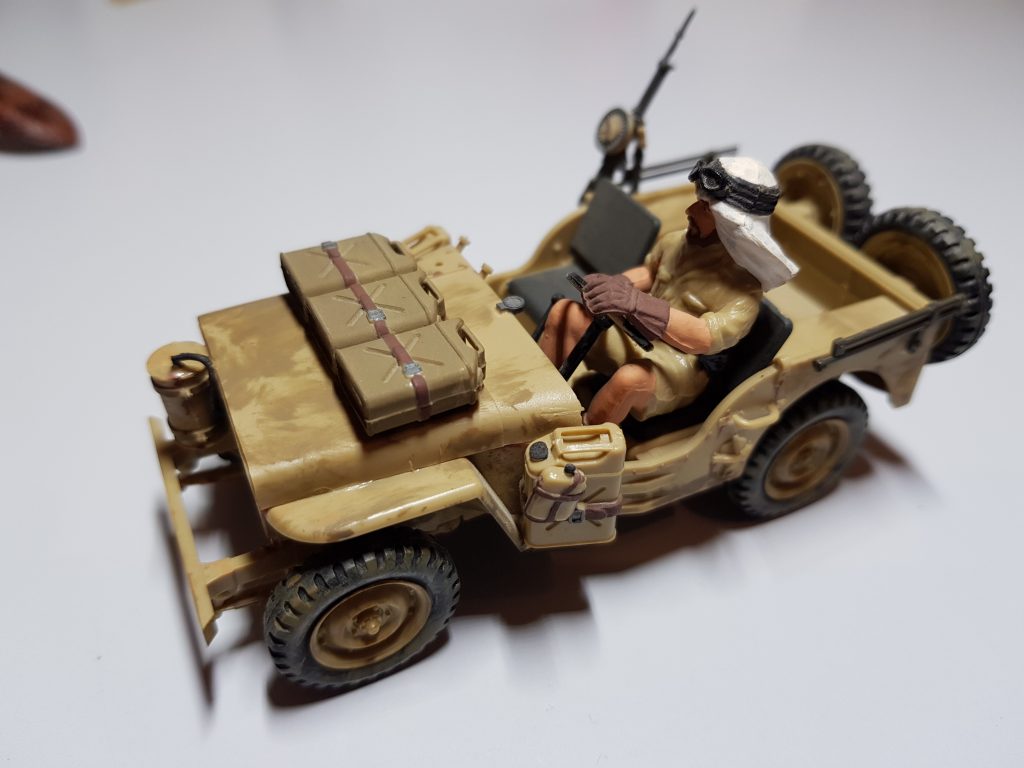 The old LRDG jeep…. after taking the picture I found the passanger figure too.

I think I’ll try the LRDG first and put them in some bit of desert…… that will be a relatively simple start. But do I need to REPAINT the models and figures, or just leave them in their 1968 state and concentrate on the diorama building?

You guessed it right…. it will probably still be weeks if not months before you’ll see photos of any NEWLY BUILT model or dio from this old-timer newbie !