Review: The Boat that Won the War (Hardback) 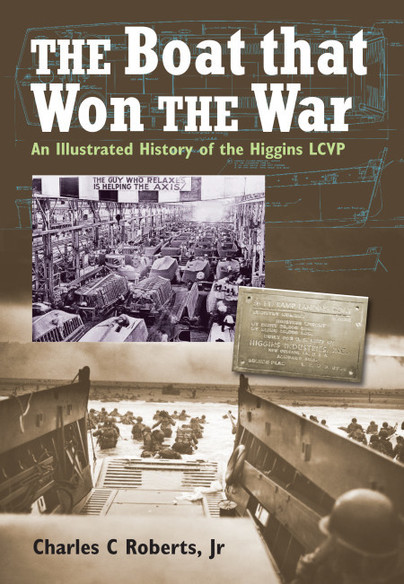 (An Illustrated History of the Higgins LCVP)

General Eisenhower said it: The boat that won the war. And he was not referring to a battleship or aircraft carrier, he was referring to a small wooden craft that helped the allies to land at foreign shores and establish beach heads. Ultimately the war was won from these beach heads….. in North Africa, in Italy, in Normandy, in the Philippines….

This book is about the history, design, production and use of that boat, the Landing Craft – Vehicles and Personnel (LCVP), but better known as the Higgins Boat after its designer and builder Andrew Higgins. There were over 23.000 of the boats built, but only very few survive today.

The book contains many fine photos and lots of drawings as well. It tells about the history of landing craft for the US forces to be used in World War 2, and how it came to be that the boat of a New Orleans boat builder eventually was chosen to be the US standard landing craft.

After reading the book I did some research on the Internet and found a couple of worthwhile videos for you to browse. (See further down).

I particularly like all the old photos of details, taken from various manuals. Also the commercial ads by the boat builders are great to see. Mr. Roberts covers the construction of the boats in great detail as well, again accompanied by many photos. The engines are covered too, as is finally the boat’s handling…. interesting to see the kind of graphics used to explain how to use the boat… and how not to !

What I didn’t know is that the actual idea of the opening ramp at the bow was taken from the Japanese !!! After reading the book I did some research on the Internet and found a couple of worthwhile videos for you to browse. The links are below.

Great book for enthusiasts of technological facts about WW2, and full of useful technical details.

Available from the publisher here.