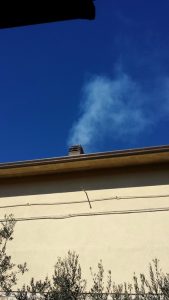 Never a dull day here in our new place in Italy. Today, while I was cutting down some trees in our ‘garden’, suddenly a black cloud of smelly smoke emerged from the neighbour’s chimney! That didn’t look good! So we dropped everything and rushed over to warn them, but the front door was closed. After some banging the ‘badante’ opened the door, only to reveal a smoke filled room with the old neighbor sitting there next to the fireplace. The man is 94 so we feared for his health….. but he just looked at us and asked if it was still burning ! The fireplace was out, drowned in water, but the chimney was burning |!

They didn’t want to call the fire brigade….. and when I was on the verge of doing it myself, more locals rushed in and put a blanket over the opening of the fireplace to stop the updraft….. I had rather called the ‘vigilante’ but everybody assured me that it wasn’t necessary. Alright, so we take care of ourselves here, but still…..

The photo shows the last part of the stressful event, with the chimney still smoldering.